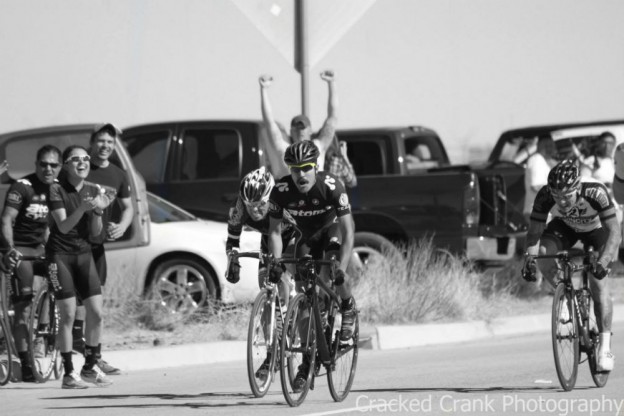 A group of about 30 Cat 5 riders came out on Sunday to compete in the 2nd race of the Winter Race Series hosted by EP Cyclists. With most criterium races, cornering is an added concern not only for the placement and acceleration but for the safety of the peleton. These shorter races also lead to a higher pace and a more assertive notion from riders who are looking for a win. Luckily, I stayed within the top 10 throughout the 35 minutes and made sure to bridge any gaps that opened up on the turn arounds. On the first 2 laps, riders went down when the peleton began to slow before each turn and fortunately none of them were injured suffering only minor scrapes. The pace through the next few laps alternated from 22-25 mph and on each incline a few riders tried to make a break however, the group was able to reel them back in before the turn.

On the 2nd to last lap, I figured the lead group would try to attack and see if any sprinters would fall off the back. I was able to stay behind a few riders that I knew would be able to keep the pace and made sure I was able to position myself before the last lap. When we went around the cones signaling the last lap, the pace began to slow to about 23mph and we knew it would become a sprint finish. The course changed this year and the finish was at the top of a slight incline. As we got to the turn around at the halfway point I decided to go wide and end up on the outside of the peleton by the right curb. I had a feeling with the sprint coming up that the group would cut sharp from the outside of the lane to the apex of the corner, back to the outside of the lane which is the fastest route. While some took the corner cautiously, I pedaled through and stayed on the outside being able to move up to the top 5 before we got out of the corner. As we began to go up the incline I began to see a few riders from Juarez and Ghost, as well as EP Cyclists.

I knew the gear I needed to be in for the situation and as I upshifted I saw the first rider put his hands in the drops and then he stood up. I measured the course earlier and roughly knew a starting point from where I would be able to start sprinting and keep it till the finish and this was noticeably further back. It was now or never and I began to sprint just enough to get out from the side of the front group and move towards the middle of the lane. I quickly saw a few riders fall back and focused my attention on Roberto as he led the sprint. I pushed even harder and that’s when I noticed little by little that he was coming closer to me. This is all I needed to see to kick it into overdrive and put everything I had into the last 100 meters. Everything else was silent as he began to leave my peripheral and all I focused on was the EP Cyclists flags pass by me so at the 3rd one I threw the bike from under me and made sure I left everything on the road…

Here’s to a great upcoming season for Team Atom Cyclist!